This is the story of Moth Lake, a small town that, behind its peaceful facade, hides a terrible secret. Only a group of teenagers, with a difficult life, will reveal what has been hidden for generations. Mysterious events will intensify starting from the eve of a solar eclipse, and our young friends will start a journey into the shadow and into their own soul.

What to expect from this game:

Moth Lake is a story-driven experience, with a lot of textual contents (more than 20k words), and hundreds of different scenes (more than 300 scenarios). The script is a long journey through a mystery, through horrors and through the characters hearts. It contains dark topics and very sad stuff, but also a lot of non-sense jokes and weird conversations, so it's hard to say weather it is a horror game or not.

The main characters move around a 2.5D world, interacting with many hotspots and NPCs. They can pull objects and perform a set of specific actions to solve very different puzzles. The artwork is a modern pixel art, with a big colour palette and a lot of frame-to-frame animations. There's a very large set of animations, including talking, walking, running, crouching, crawling, pushing, climbing, sneaking, punching, throwing... and much more. Scenarios have some modern lighting/shading work, with particles effects and a constant use of parallax, to simulate a 3D environment.

There are 6 main characters and more than 50 NPCs, with their own look and personality. You can control 7 characters through the main story and more in the additional chapters. They all move their eyes, they change facial expressions, and they have some peculiar behaviours. As the story proceeds, the player has to take some choices, affecting the characters mood and sometimes even the plot. Characters with a good mood are always smiling, they perform funny iddle animations and they help each other. On the other hand, characters with a bad mood show an angry face, they insult their friends and they are generally edgy and selfish. The general mood can even unlock hidden scenes, and personally I would play this game multiple times just to see these little details.

You can see the Mood indicators in the character selection menu, and right above, you can see the energy indicators. As in survival games, the energy level goes down if a character gets attacked. The energy level must be above 0, or the game will be interrupted by the game-over screen. The game-over itself is not a big deal, because there is an automatic save on each scene, but a low energy level makes it harder to progress. To restore the energy level, you need to find energy drinks, (sometimes hard to find). There is an inventory where you can store energy drinks and other items to be used later on some hotspots. There's a unique inventory shared among all characters because I find it boring when you constantly need to ask something. (I guess I like to be independent) 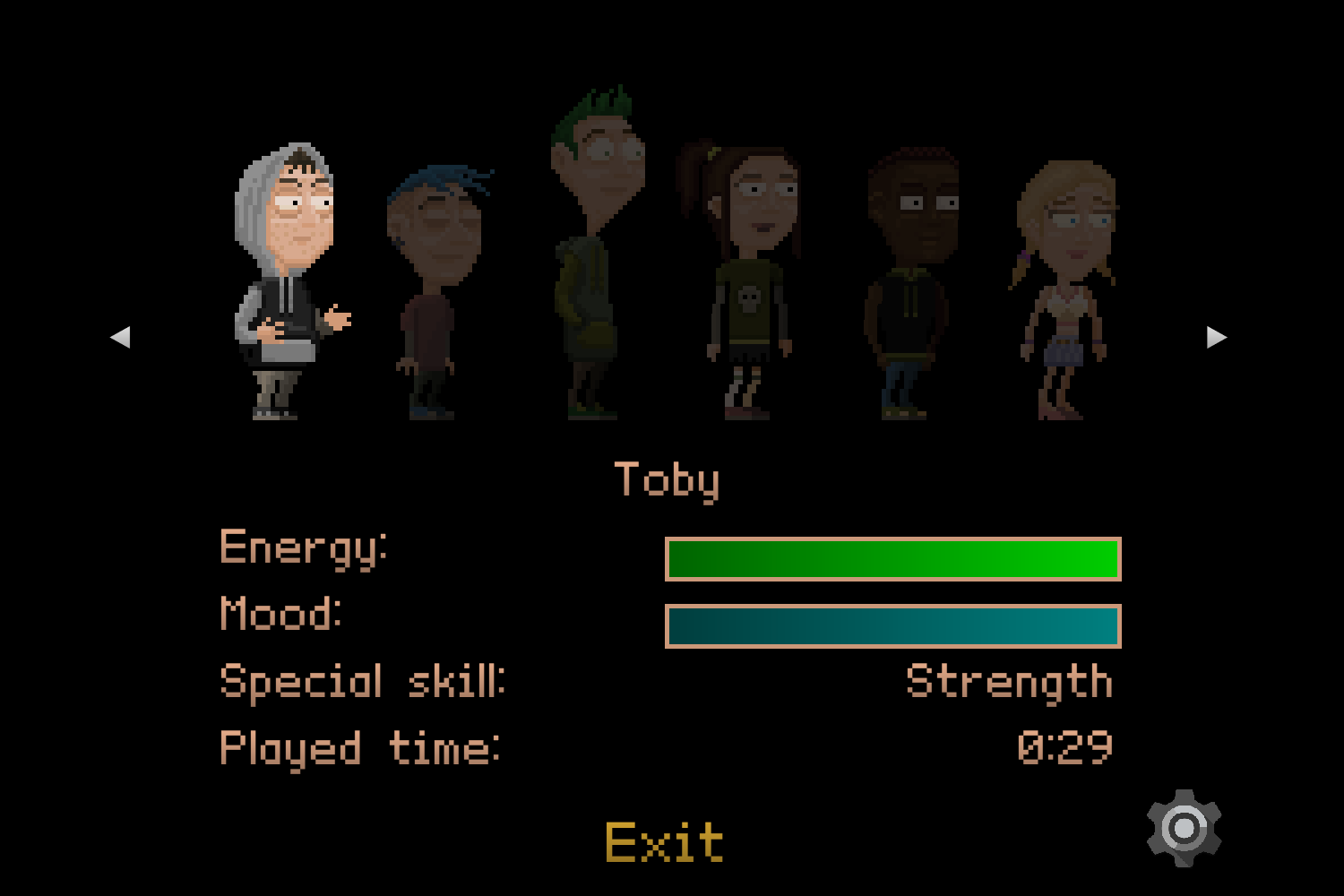 For most of the time the player controls a character surrounded by his/her friends. Each one has some kind of skill to be used at the right moment, and sometimes their position, or even their personality will be important to solve a puzzle. Some puzzles can be solved by a single character, while other must be solved using the whole squad cooperation. (I like to be independent, but I can't lift my weight).

You may have already noticed from the previous images that this game contains close-ups of character faces. Watching their faces should give more rhythm to conversations, helping you growing fond of the main characters, and provide you with a deeper experience. 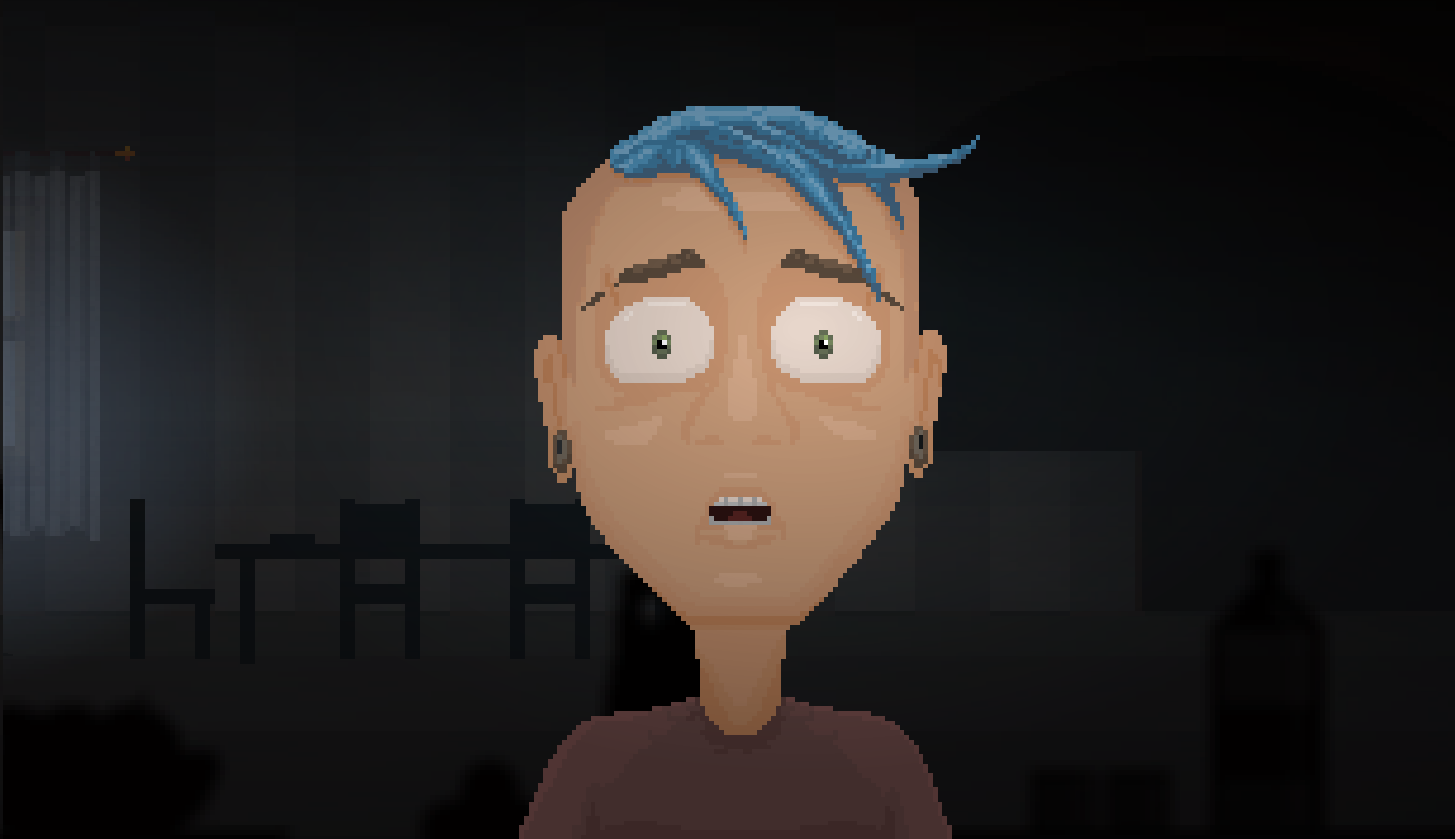 Every character has a background story that will show up with flashbacks and shattered memories, often represented by first person prospective puzzles. Solving these puzzles is crucial for them to move on and leave the pain behind. As I said, the game aims to give psychological horror vibes. So keep in mind that this game is not for everyone! Some scenes are disturbing, some scenes may give you anxiety, and some other scenes are extremely sad. Characters are constantly called to face their difficult past, and to go through their scary present.
They need to hide, to take terrible decisions and sometimes even to fight for their lives. ...But after all, your choices can lead you to the best possible ending, and if you fail, you can always try again. 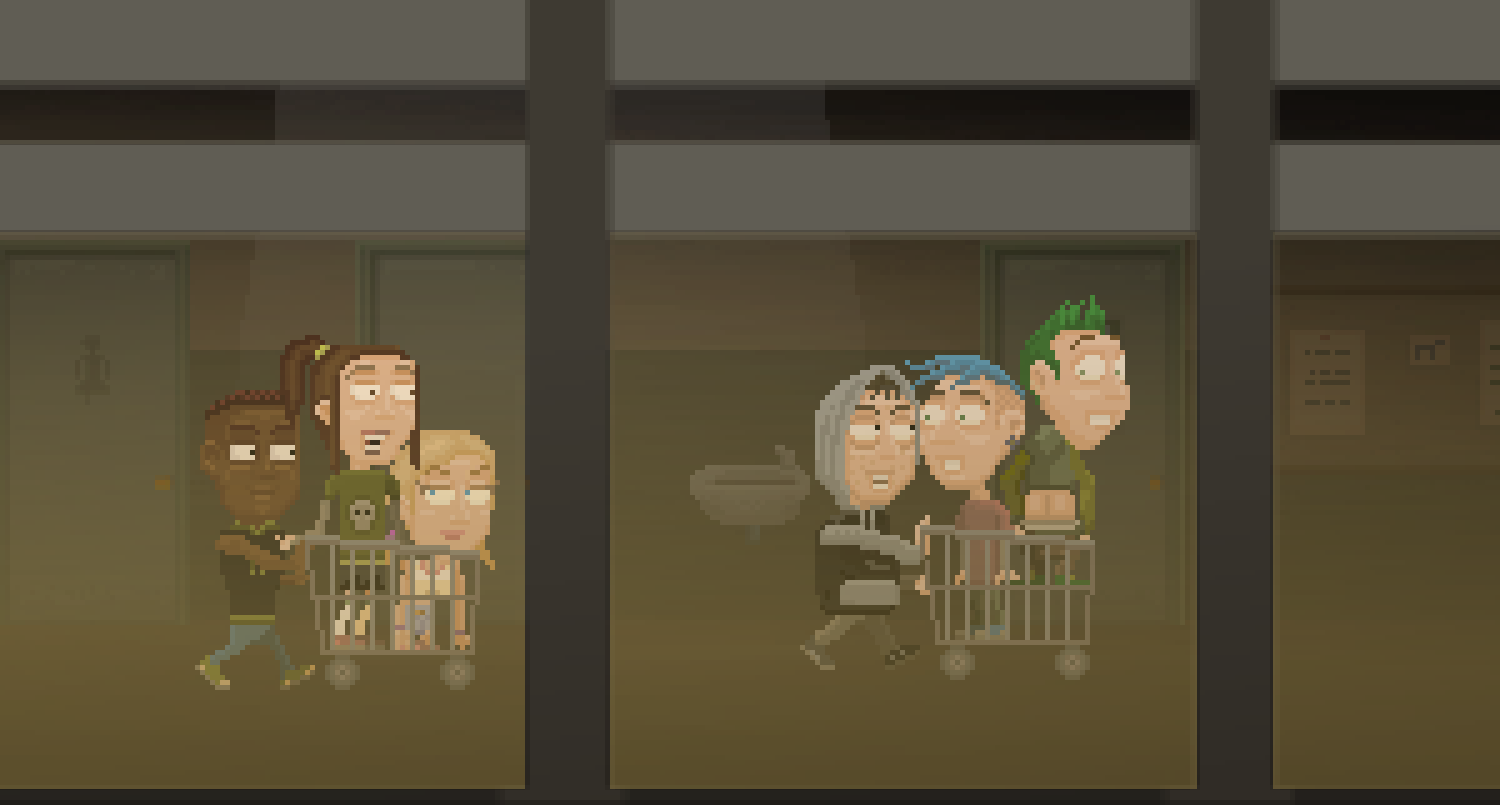 I think I told you enough, and if you want to know something more, these are some features I'm currently working on: 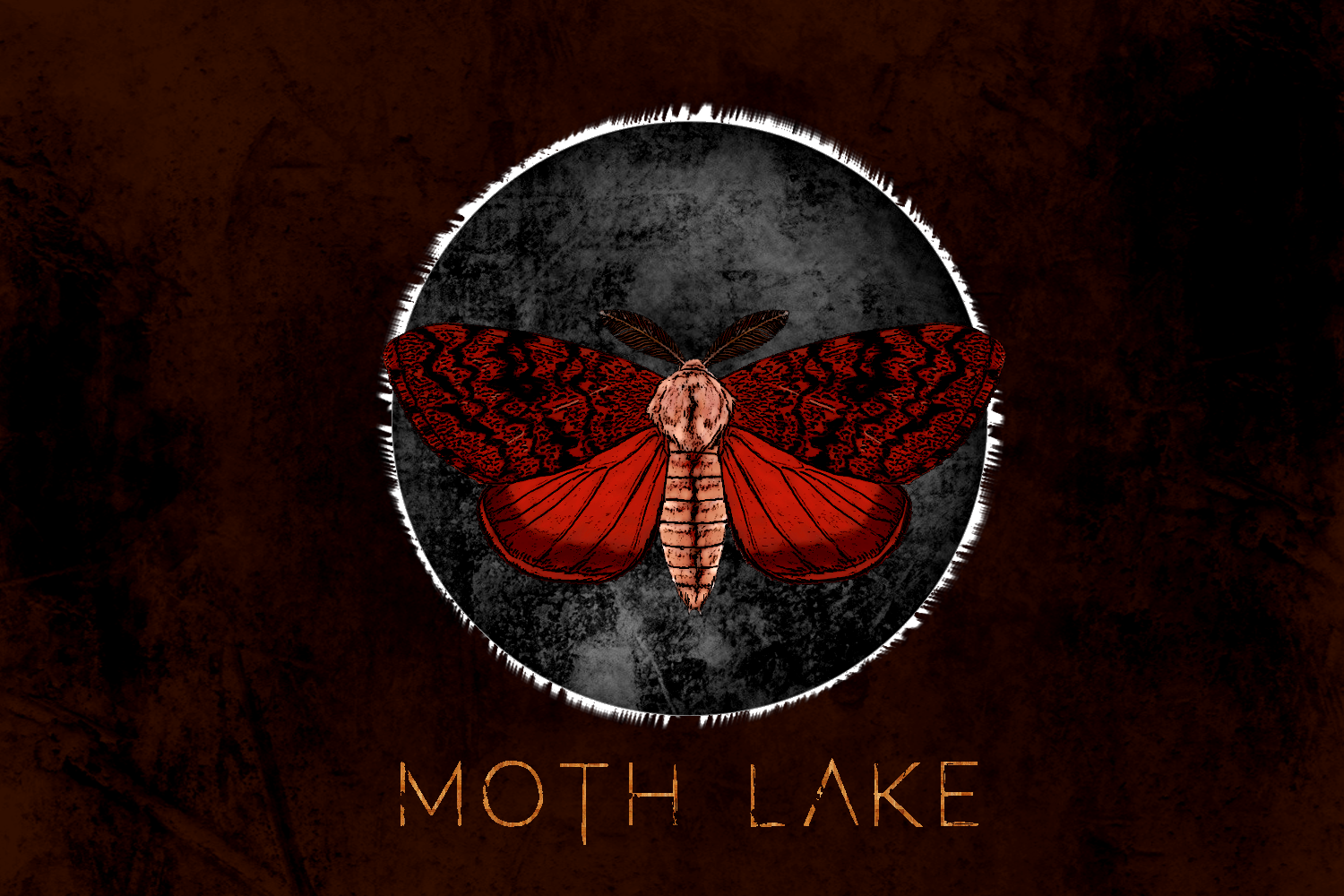 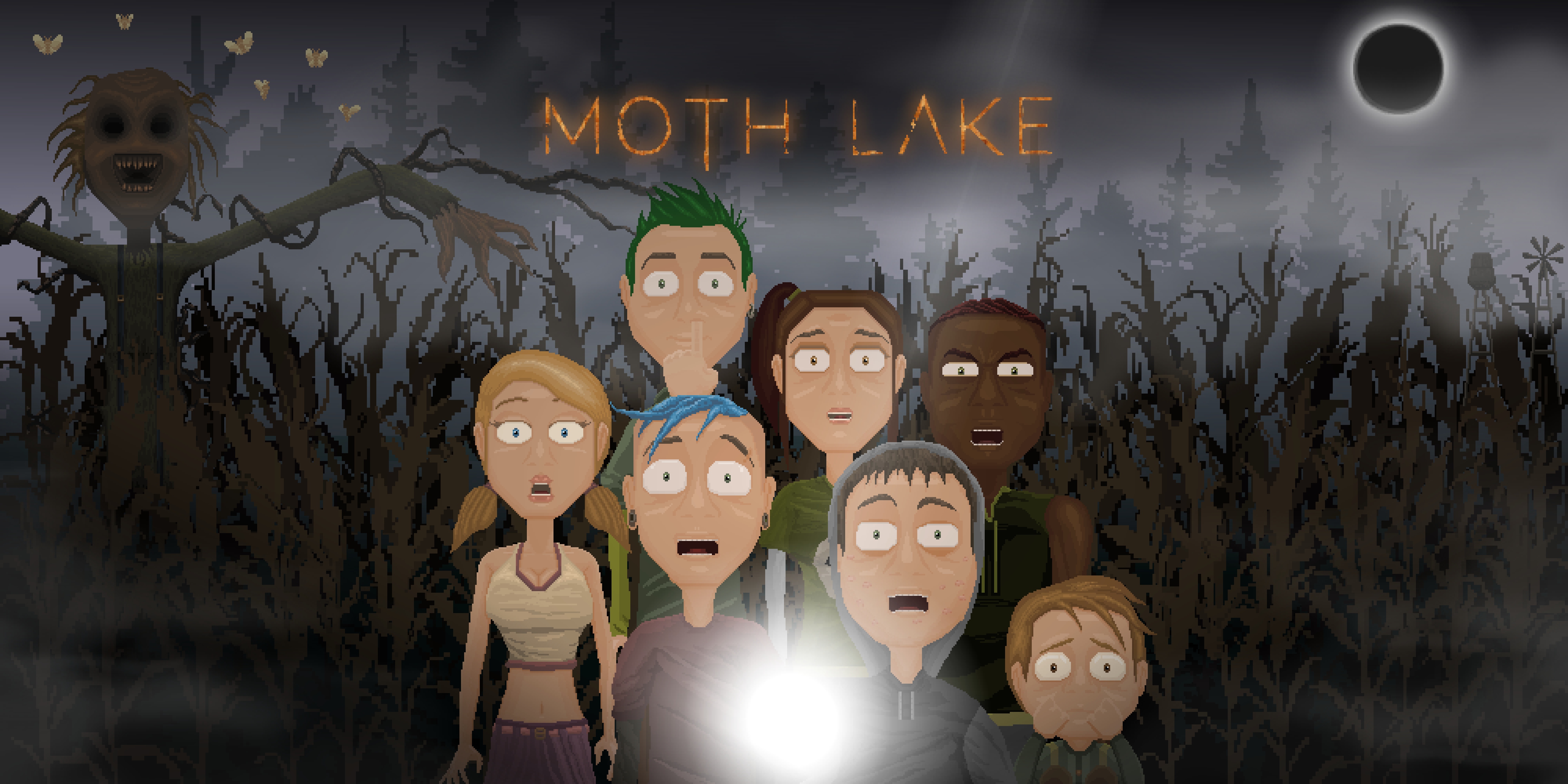 Give a thanks via Ko-fi